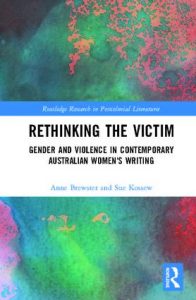 By Australian women’s literary representations of gendered violence, this book rethinks victimhood and agency, particularly from a feminist perspective. One of its major innovations is that it examines mainstream Australian women’s writing alongside that of Indigenous and women. In doing so it provides insights into the interconnectedness of Australia’s diverse settler, Indigenous and diasporic histories in chapters that examine intimate partner violence, violence against Indigenous women and girls, family violence and violence against children, and the war and political violence.